I have a questionable collection of occult paraphernalia. Especially in the form of books.
I use them and used them as anomalous instruments of cultural and psychological investigation.
Streams of alienating philosophy for those who struggle to limit themselves to the usual and classic thinkers. Ideas whose seeds have been launched everywhere, in music, in pop culture, in the ether.
Among the tomes I am most fond of, and of which I am happiest, the unreachable Magick IV by A. Crowley and the four volumes of Magic of the Golden Dawn.
Books whose value also lies in a certain graphic and editorial expertise. The same expertise that I find in the volumes of Black Letter Press, a small and independent publisher of Turin, composed by Alice Winkler and Claudio Rocchetti.
A far greater expertise indeed, which, while working on contiguous territories, offers fabulous editions and highly recommended books.
Follow them, discover them and, if possible, participate in the campaign now in progress: it is a grimoire of black magic, do you really need to know more?

What prompted you to create an independent publishing company specialized in rare books that deal with occult philosophy, art and protoscience?

Alice: We are both book lovers and found it a pity, that new editions of old, interesting texts come often in floppy, sad paper back editions or they are so expensive, that a person with a normal income could never afford them. We thought there must be better ways to honor our favorite books. Inspirational for me is for example Ouroboros Press, that are republishing classic esoteric Texts in the most beautiful designs.

Claudio: I have always been interested in the book as an object, as an entity in itself. So all the processes around his creation (paper, techniques, distribution, and so on) intrigue me. Combining my curiosity with Alice's passion and technical skills, it came naturally to us to give some importance to editorial care. 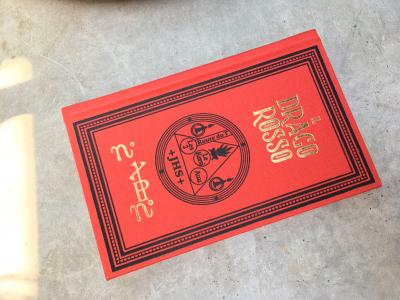 Why then did you focus on offering books in limited editions, choosing to produce elegant and neat tomes with higher costs than the average?

We are well aware that our topics are not for everybody. So first - it would make no sense to print 1.000 exemplars of obscure scientific text from a past century. And second - we do not only want to preserve and revive forgotten books, we also want to produce something so aesthetic that it is collectable and special. The limited, hand numbered editions are giving our books a special touch.
So far, all the books we have produced were impossible for us to buy in the original edition. For example Sidereus Nuncius in the 1610 editions sells currently for 600.000 - 800.000 USD at Christies.
Despite being a new reality we have quite clear the audience we are addressing, a small group of very demanding enthusiasts. The attempt is to offer very accurate editions, with a personal touch at a price that remains accessible. 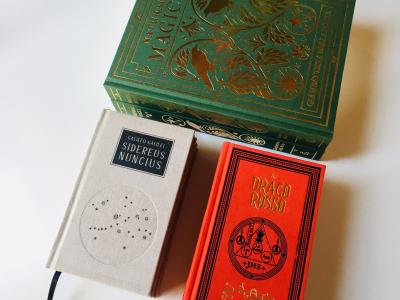 Do you have a very precise and established editorial plan, or do you somehow take into account potential changes in your plans?

We have a rough draft for the next 3 titles. But sometimes things changes and then you have to re-think. We had the strong idea to produce one book but after some research it turned out that it is connected to extremely disturbing racial ideas that we don’t share at all. The established titles to come this year so far will be Oh death!, an Anthology of English Romantic Poetry, selected by Claudio. He put poems together that explore the world of nightmares, fears and dark sides of the human. We’re also working on an english translation for our edition of Il drago rosso, the infamous black magic grimoire, and there might be another astronomical book. But that’s a little secret for now. 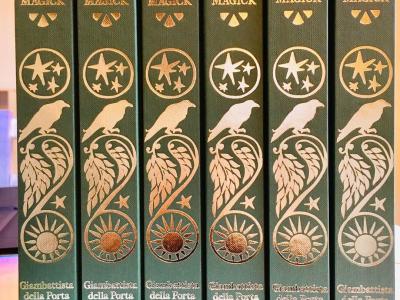 What are your previous experiences of life and work and how your experiences and skills are put at the service of Black Letter Press?

Claudio is successful as a sound artist and musician. He studied philosophy and literature so with his knowledge and connections, he is the secret weapon in our little publishing house. I, Alice, am a trained book binder and editorial designer. I was working many years for publishing houses. The financial security was there but never found it really satisfying for my artistic side. We’re both from the DIY scene and if we wanna start something, we usually make a plan how it can be done and just start. I’m happy we have this dynamic in our relationship.

A curiosity that deals with private life. How do you reconcile your life as a couple with the work? Is it not problematic to divide the "free" time and the time dedicated to work?

It’s actually perfect. We are both very curious and creative and agree on a lot of things. Also we not only share the same sense for esthetics and art, we have the same work ethics as well. Claudio is really good in dealing with numbers, which is a compete grey zone in my brain. The same time, he trusts me absolutely in any questions concerning design or book production matters. It was always our dream to work together on a big project and put both our best features in one pot. But of course it is impossible to draw a line in between work, family and free time. It’s all the same and it kind of feels fantastic. 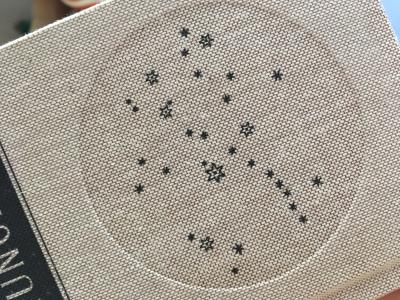 With whom and how many people do you collaborate on your publications?

At the moment we’re working with the artist Marcello Crescenzi (Rise Above). He creates the artwork for Oh, death! and we can already tell that it will be breathtakingly beautiful. We had Andrei Bouzikov collaborating on the artwork for Natural Magick. He is famous for his grim Heavy Metal record covers. 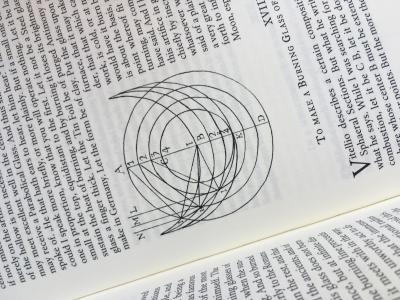 How much do you love, and have you been able to explore the universe of occult publications? Do you have some books that you hold particularly dear in this field?

I am fascinated by the occult from the philosophical and socially point of view. Especially on what great influence adventurous thinkers like John Dee and Giordano Bruno had on the late middle ages and the Renaissance. Books you should read are amongst others Three Books of Occult Philosophy by Henry C. Agrippa, Ars Goetia (the Lesser Key of Solomon) and Aldaraia (the Book of Soyga) by John Dee. Just to name a few. The most fascinating and fantastic looking of them all is certainly Codex Gigas.