Starting from the past, I’ve had the chance to read more than an article regarding your beginnings in the punk, DIY and fanzines’ scene. Which were the biggest lessons you took from that world and scene? And what about the music you listened to in those years?

Yes, I produced a punk fanzine with friends - it featured band interviews, reviews and articles along with my comic strips featuring characters like Arnie the Anarchist, The Right-On Kids and Subvertman! It was a means of combining my passion for both punk and comics. It showed me that I could actually finish comic strips too, so if I learned lessons from it, it was to follow your interests and just go for it. The punk/DIY ethic really does allow you to follow your heart and get your work out there whatever skill levels you possess at that time, so I do think that is common ground between the two. It also taught me that raw work – in comics or music – is more interesting and relatable than slick, polished work. The personal vision, the individual styles and quirks of comics are a big part of the appeal to me. My advice to comic creators starting out would be to just get your stories or art out there - by self publishing or online. Prove to yourself – and even to potential editors – that you can do it. You will feel there is room for improvement but that feeling never goes away, so you might as well just endeavour to improve on the next project. That's what I'm always hoping will happen!

As for the bands I enjoy, a number of them are scattered through the pages of They're Not Like Us, so I'll leave it at that! 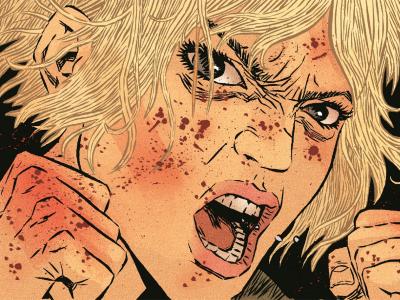 Do you feel They’re not like us to be linked to particular readers, due to the themes and characters?

Everyone is looking for their place in the world, so the characters are universal in that respect. Their sense of marginalisation is very applicable to today's younger generations, and that explains – if not excuses – some of their behaviour. We should expect nothing less than for the discriminated against to fight back. To fight for a better life for themselves than society is allowing them. I think They're Not Like Us should appeal to a wide range of readers. At least I hope so. The hook of superpowers may be a familiar one to comic readers, but they're not there at the expense of the character-driven plots and situations.

For curiosity sake: how do you relate to the characters in the They’re not like us?

I relate to them on a human level. Their vulnerabilities and securities are familiar, but some of their actions... well, let's say that if I lived with them I'd sleep with one eye open! They would be useful to have around the house though! It's hard to narrow it down, but I think I relate to Syd and Gruff the most. They happen to be the two characters I most enjoy drawing too, along with Maisie and The Voice.

Have you had any chance of re-imagining your own material in this comic re-made by someone else?

Ha ha, that's a tricky one. Hmm, I admire just too many artists to properly answer this question... Let's say Becky Cloonan or John Allison because they would do a such fine job with the clothing and excel at the body language and facial expressions. Or maybe Warwick Johnson Cadwell, simply because his style is just so good! I do have some sketches people have drawn of They're Not Like Us characters, and it's always an honour to see them.

Is there some particular difference in the way you work, and the material granted, by the likes of Eric Stephenson and Brian Wood? Which are the main differences between the two?

Both Eric and Brian have a clear idea about the visual aspects of their stories. For Northlanders, Brian provided descriptions and reference pictures and Eric describes clothing, chooses many of the locations and so on. That's not to say I don't follow my own path, just that the visuals are a collaboration between writer and artist. I think the main difference between working with the two, was that one title was for DC Comics and the other – They're Not Like Us – is for Image, and thus 'creator-owned'. Working with Eric has been a joy. Not only are his scripts perfect, but he's very trusting – he doesn't require thumbnails or pencils – so I'm able to just go with my gut-feeling on pages. This gives me a sense of freedom and allows me to work more organically. I think I've developed my style as a result. This freedom is also true of Jordie Bellaire on colours and Fonografiks on the lettering and design. We're following our instincts and personal tastes and hopefully combining our strengths into something distinctive! 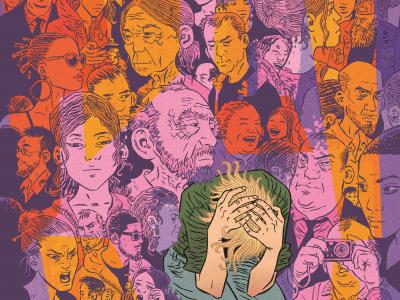 I saw some of your drawings related to Hugo Pratt’s Corto Maltese...

I love Pratt's work! It's always been an inspiration. He's one of the great stylists – those heavy black inks and stark profiles – and of course Corto is a perfect character design, hence my consistent urge to draw him! I think I'd like to be him! I appreciate the ponderous, quiet moments in the stories too. Their conversational parts. Comics are a perfect medium for these kind of scenes – it's one of the many things I enjoy about Eric's scripts in fact – so it always surprises me that some people expect non-stop action.

Do you think that modern day comic serialization is being someway changed by what's going on in tv serials?

There's a definite symmetry between the two mediums. Certainly in how they're both consumed in big chunks these days – ie via streaming or collected editions. It's easier to keep track of large casts when TV shows can be binge-watched, and They're Not Like Us has quite a large cast too. To me, a downside of binge-watching and reading is that you don't really have a chance to absorb and process the stories, you can just let them wash over you. Which isn't to say I don't watch quite a few TV shows, because I do! Comics can't compete with those for sheer volume, but I do think they're a truer reflection of the author/artist. They're much more of a singular vision than something created by committee, so they'll always be number 1 in my eyes!

How do you fit between modern day “underground” niche and the structure of big companies?

That's a good question. I definitely relate to underground comics more than the bigger companies. In underground/independent and European comics for that matter, you can tell any story in any artistic style. You can't argue with that, as a creator or a reader. Image Comics kind of bridges the gap between indie and mainstream and I feel my style fits there. Their readers are open-minded. I'm very fortunate to be working with them. I was an avid reader of superhero comics as a kid, though, so I'd never rule out working on those either!

What about your current projects?

After we finish They're Not Like Us, I'll be working on a new series written by Andi Watson. Andi and I previously worked together on a series called Paris, which is probably the project that's been closest to my heart, so I'm thrilled we'll be doing something new. Image will be publishing this, I hope. I'm also drawing a comic for IDW Publishing. I probably shouldn't talk too much about this one yet, but it's in the works. Eric and I have also discussed potential ideas for a follow-up to They're Not Like Us.

Is it there some new work that blew your mind away in the last semester and you'd like to draw?

Hmm, my dream series to draw would possibly be the Nestor Burma mysteries by Leo Malet and drawn by Jacques Tardi and others. I love those books and I like drawing Paris and mid-20th century clothing and cars, so that would be fun. There are too many writers I'd love to work with to list. If only drawing comics didn't take do long...!